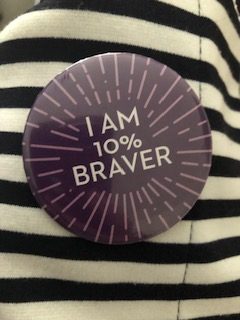 In late April this year, a friend and colleague-at-large of mine posted out to some of her contacts on LinkedIn about an education festival at her school in Switzerland and explained that she was looking for more female participants from other schools. There was a special code she gave out, and that was enough to pique my interest.

I took a look at the programme. It was really cool, with fancy keynote speakers like Anthony Seldon and David Didau, whose work is canon for any educator. There were fantastic talks offered on teaching and learning, educational psychology, mindfulness and global citizenship. But it also had an intriguing purple-coloured stage with talks all day by women, for women, or supporters of women leaders in education. My intrigue in #WomenEd was born, and I decided to attend, bringing along my then Head of Secondary, for the ride, finding a cheap flight from Malaga.

On the day my Secondary Head and I split up to see as many different sessions as possible, and I of course, headed for the purple room as quickly as I could, after sessions on intercultural communication and mindfulness (I’m a careers educator who believes in these passionately as tools helpful in identifying purpose). I remember walking in and realising that the WomenEd session was a conversation. I felt at first like I might have intruded, coming in a couple of moments later than everyone else, as there was already a hubbub of discussion happening, but it soon became apparent that it was a warm, open one.

Jules Daulby, Sameena Choudry, Keziah Featherstone, Liz Free, and Alison Kriel were there, sitting in panel formation, but the house lights were also on the audience members and they were being encouraged to chime in, comment and actively participate as the panellists posed inclusive questions. “Which of us has felt like this?” “How many of us have lived this situation?”

Hands shot up all around the room as we discussed the challenges of equal pay, part-time working, barriers to leadership, self-doubt and denial that many working women experience. Liz presented to us on the shocking figures that underlined the inequalities we all know are still present. With education being a sector dominated in number by female workers, it’s still disheartening to see it in black and white that it takes women longer to earn the same as men or get to a leadership position; that trend covertly creeps up in secondary schools and in international settings. I thought also about my work on the “other side of the desk” on the university side: senior leaders in university departments largely mirror this trend.

By this time, Vivienne Porritt had joined us, a bit flustered from a late arriving flight, but lovely and warm as ever, she sat down and reassured us that it was all going to be all right, just as we must have looked a bit miffed about all of this inequality. She proceeded to tell us about the book the movement had just co-authored, and all of the regional and international groups, which were looking to already be a barnstorming success by the rate of growing numbers.

Hearing a very simple call to action: that we, women working in education, must start with something that works against all of those learned behaviours – that we should wait, that we can’t do it, that we don’t tick all the boxes on the application, that it makes sense that the job can’t be part-time, that we don’t mind being passed over for the promotion because we’d rather be liked by colleagues than be in charge (it can be both, of course); all of this self-limiting rubbish we come up with on a daily basis that helps the status quo stay the way it is – all of that came crashing down with just one clear call to action. “Be 10% Braver” came the encouragement. Whatever you thought you couldn’t do, go towards it by just 10%.

At the end of the session, inspired and hopping mad by the inequality I’d just seen, I found my hand creeping up. “Is there a network in Spain?” I asked. And I went up and gave my card to Vivienne. I’m delighted to say that WomenEdESP launches officially with an event celebrating equality through education, art and music at the British Council School in Madrid on Saturday March 7th 2020 (our co-lead, Mercedes Hernández, is head of school there: making the programming possibilities garnered by a bilingual school even more exciting!).

It’s going to be a year of vision, of bravery and of connection for me, and for our network partners. And that is my simple #pledgeforchange2020: to keep going towards these things, one 10% braver movement at a time.

Get all latest content delivered to your email a few times a month.